Books for the Barrios – Teaching Children to Think Globally

Go Inspire Go (GIG) is proud to share this month’s Social Good Spotlight to raise awareness of individuals and organizations doing good in their communities to inspire others to take action and ultimately make real social change. GIG believes everyone can find inspiration in helping others, whether it’s through doing small acts of kindness or working at an organization dedicated to making a difference. If you know of an individual or organization that you think should be featured, please email Marcia and help us forward their stories to inspire the world. 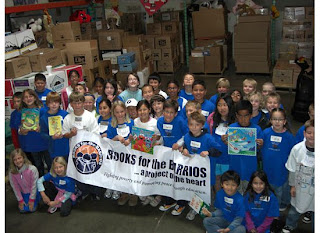 “When American children come to our facility, they learn how children in the Philippines are just like us -– they are no different.” – Nancy Harrington,co-founder of Books for the Barrios

What is Books for the Barrios?
Books for the Barrios is truly “a project of the heart.” The 100 percent volunteer-run organization collects school textbooks, educational learning aids and devices from schools, publishers and schoolchildren in the U.S. and delivers them to remote barrio public schools throughout the Republic of the Philippines.

What is Books for the Barrios’ mission? What big changes is it trying to make?
To provide all children, especially disadvantaged children in conflict areas, access to quality education. In addition to having enough books and school supplies, it’s important that qualified teachers are educating the children. There is a shortage of primary school teachers worldwide, weakening global efforts to provide access to education to all children. Many developing countries lose their educated population, who leave their home countries for opportunities abroad. Strengthening the education system is essential to securing economic development and a better quality of life. 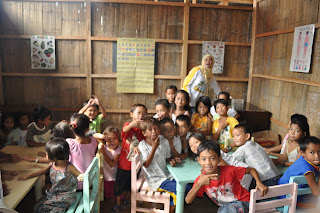 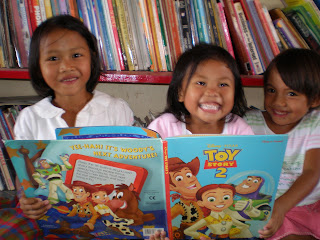 Four months later, Books for the Barrios donated books, toys, and art supplies for these 60 children.

How is Books for the Barrios using its power to help others?
By sharing resources and putting educational materials directly into the hands of the students and teachers who need it most. More than 40 percent of households in the Philippines live on less than $2 a day. More than 13 million Filipino kids live below the poverty line, representing over 44 percent of the population aged 15 and below. The neediest schools, most of which are located in remote areas of the country, are prioritized for shipments from Books for the Barrios, regardless of politics, religion or ethnicity. Back in the U.S., Books for the Barrios organizes opportunities for children to participate in the collection and packing of donations. The organization also enlists volunteer American education development specialists to provide professional teacher training programs to thousands of rural educators.

What inspires Books for the Barrios to do this?
Dan and Nancy Harrington, founders of Books for the Barrios, met in the Philippines in the late 1960s and fell in love with each other and the country. They cared deeply about Filipino children and their families, inspiring them to take action and start an organization in 1981 to provide educational materials to severely under-resourced schools. Nancy lamented, “I’m a teacher and when we lived in the Philippines, I saw the devastation in the schools. I felt the apathy with the government and people in general. I felt the hopelessness and I said, ‘My god, what I throw away in my first grade classroom -– broken crayons and pencils — would be gold to these children.’ ” This realization over three decades ago continues to fuel the organization today. 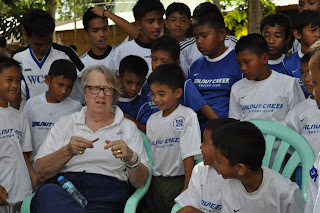 What is Books for the Barrios focusing on now?
Current projects include:
•    International Model-of-Excellence Schools Program – Books for the Barrios ships books and supplies to transform severely underdeveloped barrio schools into learning institutions that set a national standard.
•    Green Action Program – Books for the Barrios diverts at least 700,000 pounds from landfills in the U.S. by shipping valuable books and other learning tools that might otherwise become waste. The program educates children worldwide about the environment.
•    Global Pupils’ Email Program – In order for American children to understand that their classmates overseas are “just like them,” the program teaches them computer literacy and encourages them to use the Internet to communicate with a global network of nearly 40,000 children worldwide.

How can GIGSTERS get involved and support Books for the Barrios?
•    Donate money to Books for the Barrios. Securing resources to sustain its work is the organization’s biggest and constant challenge.
•    Provide items on their wish list. Organize a collection drive or party in your community or at your job and encourage your neighbors and friends to donate.
•    Volunteer your services. If you’re in the San Francisco Bay Area, volunteer at their facility. If you’re not in the area, the organization is always looking for help in getting donations, social networking and marketing, and other tasks. To find out various ways to volunteer, click here.

Nancy shared a story about a Filipino-American woman from Redwood City, Calif. who reached out to Books for the Barrios, wanting to give back. Books for the Barrios found a school in great need of resources in the woman’s barrio in the Philippines. Now Nanunga Elementary in Hinigaran, Negros has a world-class library and a dedication ceremony was held last month.

Reflections on manifesting my dream: ‘The Toan Lam Show’

When to Decorate for the Holidays

One Key to Getting Unstuck