Welcome to the 2012 Summer Olympics in London, England!

How appropriate that this year’s Olympic theme is “Inspire a Generation” and that Go Inspire Go is on the go at the Olympics with the youth choir VOENA, which will leave you on a high note.

Hello from Olympic Park! I’m literally blogging from inside the holding area right now as we wait for the group to put on their colorful costumes, primp and prep. The energy here is awe-inspiringly-invigorating!

WOW. I’m going to try my best to convey what I’m experiencing here in videos, blogs and pictures.

The thought that athletes from around the globe – the best of the best – have converged here to do what they love most while sharing their talents on this worldwide stage blows my mind!

But not everyone is competing for the gold – some are performing in another light.

I’m on the road with Benicia, Calif.-based children’s performing group/choir Voices of Eve ‘N Angels, a.k.a. VOENA. The group was one of at least two youth choirs invited by the Local London Olympic Committee to perform on opening day. 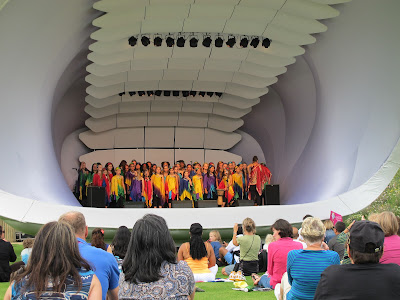 They’re a multicultural group that I like to consider a tribe of angels who sing, dance and lift your spirits. They literally sound like angels as they harmonize songs in more than 20 different languages.

The first time I listened to them sing, I got the chills and couldn’t help but smile. So when they invited me along for their Olympic adventure, I jumped on the plane, train and tube to capture these authentically awesome moments for you to see. Just take a listen to a clip of their performance at Olympic Park:

There’s lots to love about VOENA: their genuine joy while singing, colorful costumes, songs and the multicultural mix of kids (plus a few adults) whose ages range from 5-18. But what I love most is that founder Annabelle Marie inspires the group of more than 150 kids to discover their voice and use it for good. They’ve infused inspiration and happiness in the lives of the community, also singing at schools and charity events.

“We’re unique because of our no audition policy. Each of them has to earn their role in the choir. We call it the VOENA BIG 3: First, accept the challenge. Then be self-motivated. And embrace a hard work ethic.” said Marie.

It’s been a jam packed trip so far: lots of traveling, rehearsals, performances and a bit of sightseeing. As a part of the Olympic celebrations, VOENA was invited to sing at the passing of the torch at the London Canal Museum, Central Hall Westminster and with Mediaeval Baebes.

Adding to the mix of exciting entertainment, Mediaeval Baebes, UK’s top selling vocal ensemble, invited VOENA to sing at their concert at St. John at Hackney in London. 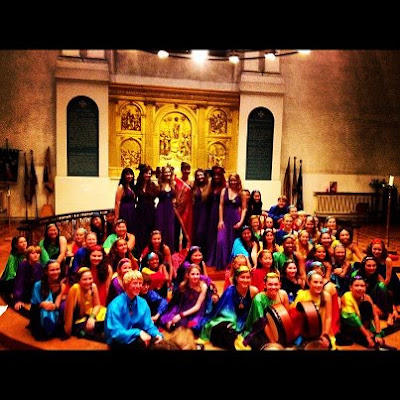 “We are so honored that VOENA has accepted our invitation to sing here in London,” said Mediaeval Baebes chanteuse, Clare Edmonsdson, excitedly. “They are so authentic and seem to be in the moment and fully enjoy singing.”

Edmonsdson said her manager saw VOENA on YouTube and extended the invitation to celebrate and collaborate in London.

“The kids are incredible!” Mediaeval Baebes member Sarah Kayte Foster told me backstage as her eyes welled up in tears. “They make me to want to go home and write more music.”

I’m constantly impressed by the maturity of the VOENA kids, their endurance and positive attitudes. Behind the scenes, the kids have to endure lots of traveling, long rehearsals and navigating a new environment – all executed with professionalism, finesse and angel-like voices.

No matter what language they’re singing in, I’ve witnessed VOENA voices resonating with every audience they touch, as concert goers clap, smile and wipe back tears. I guess love, joy and inspiration can be felt in all languages. 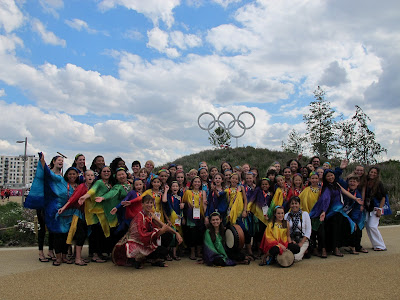 What Kids Taught Me About Coping with Suicide Loss

I thought I was doing my sister a favor by taking care of her kids for a month, one year after their father’s suicide. Little did I know how impactful it would be for me.

Make the Connection: Why One Man is Walking from Canada to Mexico

Jordan Bower wants you to join him on his journey. His latest adventure: to walk from Vancouver, British Columbia, to Mexico. His goal is to create a shift in you and me.

Shedding My ‘Ugly Truth’ Through CrossFit — One Pain, One Pound at a Time

Two family members told me early on that I was “ugly” and “fat.” “Your face is flat.” “Look at your big belly, it’s gross.” I pretended to ignore it and acted like it didn’t bother me. It hurt deep inside. The truth is, looking back at old pictures, I was never overweight or ugly. But I felt like it.

A Conversation with AARP California: Inspiration and Affirmation During Turbulent Times

How to Still Have a Happy Thanksgiving During the Pandemic

How to Calm Yo-self: The 2020 Election Edition