When you hear about Nico Castro, a courageous 6-year-old boy from Northern California who, despite his battle with brain cancer, brought Halloween to his friends in the hospital, you can’t help but want to use your power to help this real-life superhero.

“Even though he’s worse off than some of these other kids in the hospital, he’s worried about them,” Nico’s mother, Marlene Castro, said. “They can’t go trick or treating and they can’t get candy.”

After Nico was diagnosed with brain cancer last fall, he was worried that he wouldn’t be able to celebrate Halloween, his favorite holiday. Thanks to a break in his treatment, this caped crusader was given the all clear. “He likes being Batman because it covers his bald head. He’s self conscious,” Marlene Castro said, holding back tears. 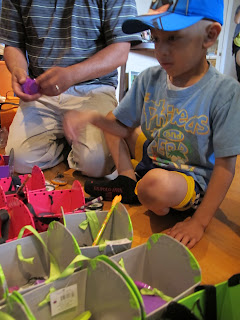 But the news was bittersweet. Nico was sad his friends in the hospital wouldn’t be able to experience Halloween. “What about the other kids?” he asked Raul Castro, his father. “Can we go to Target and get costumes for the kids?” But with the mounting hospital bills, it was impossible for the family to buy costumes and goodie bags for 50 of his friends at Kaiser Permanente Oakland Medical Center.

They came up with an idea: start a costume drive to bring Halloween to the hospital. This Halloween hero’s goal was to collect 50 costumes and goodie bags. Since Go Inspire Go (GIG) is about featuring everyday heroes, leveraging social media to build community and spark civic engagement, we had to tell Nico’s story and multiply his good deed.

Nico’s tight knit community pitched in and was overwhelmed by the outpouring of support from viewers around the country. Watch the video that sparked a nationwide movement:

After GIG shared his story, Nico quadrupled his goal and collected more than 200 costumes. Additionally, supporters sent him more than $1,500.

The local and national media have ensued. A producer at NBC Nightly News with Brian Williams called me the day after we uploaded the video. I invited them to join us as we produced a follow up of Nico dropping off costumes to his bed-ridden friends in the hospital. Check out our follow up video:

Garvin Thomas and his local NBC affiliate Bay Area Proud segment contacted me to feature GIG and Nico’s cause.

“I’m so honored to be his mom,” Marlene Castro said. “God really did bless me by making me this little boy’s mother. He adds so much love and so much light to our eyes and it’s great to see that he’s able to touch and impact others lives as well. It’s inspiring for all of us.”

I will always remember the image of Nico walking down the halls of the hospital as he delivered costumes and goodie bags to his sick friends. He put on his sanitary mask – a fire fighter’s costume clenched in one hand, the other clasping his older brother’s hand — my heart sank. But that feeling didn’t last long. As soon as the parents and children saw Nico, their eyes filled with joy and smiles widened. Their spirits were lifted.

Jackie Jumper’s daughter received a witch costume and coloring book from Nico. “It’s all very overwhelming for me,” Jumper said. “It’s overwhelming to be here with Anne, but it’s more overwhelming that a child who is so sick can think of other children at this time and what they need… It’s not just a costume or a coloring book. It’s about children being happy around these wonderful holidays that they enjoy so much. I remember Halloween growing up and it was one of my favorites. It’s just special to these kids… It’s very heartwarming and special for him to do that.”

The kindness continues to ripple outward. Sydney Burnett, a 14-year-old who was given a costume from Nico, couldn’t stop smiling. “It makes me think I don’t have it so bad. He’s worse off than me and he is helping others. It makes me want to do something to help someone else,” Burnett promised.

What can YOU do – to give back to someone in need?

* Special thanks to everyone who responded to our calls for donations:
–Green Apple Books, Sparky’s Balloons, Amanda Rivas and the Rivas Family, DayDreams and Nightmares and Amy Pankratz, founder of Wonder Capes for making superhero capes for Nico and his brother and sister.

(3)     Share this story with a child in your life and encourage them to take action.

Streamline Your Room & Your Life

Whether you’re decorating a room from scratch or switching up a room with stuff you have, here’s a simple tip that will save you a lot of confusion and stress.

How Your Clutter is Holding You Back From Helping Others

What does simplifying and decluttering your life have to do with your altruistic intents? Clearing your physical, emotional and spiritual

Foraging Fun: How Will You Make Time to Play Today?

When was the last time you played? While it may seem counterintuitive, I’m inviting you to release judgment and simply allow yourself to luxuriate in play.

Thriving and Moving Forward During the Pandemic’s Pause

Are You Wasting Your Struggle?