What started out as a crazy idea has manifested. Our goal of spotlighting 50 heroes in 50 states has resulted in numerous blessings, miracles and new friendships. Thank you to everyone who supported and blessed this project. If you’re interested in being part of our mission to uncover everyday heroes, reach out: info@goinspirego.com — we’d love to hear from you.

The Be ONE Project

Who: Matthew Kaplan
What: Peer-to-Peer Anti-Bullying Program Targeting Middle Schools
Where: Phoenix
Why: It’s cool to be kind!

The Catalyst: Bullying is a topic of concern in schools across America. With convenient access to digital devices and social media, hurtful messages are multiplied and spread like chicken pox. Adding to the angst, kids can post harmful messages with anonymity, ease and without a real-time reaction from the victim.

When Matthew Kaplan’s kid brother Josh was bullied in middle school, he decided he had to do something. “One day, he came home from school and his self-confidence was shaken,” Matthew said. “He started to withdraw and wasn’t himself anymore.”

Josh said he received dozens of hurtful text messages, like “you suck”. What made things worse — he discovered that his friends, disguised behind blocked phone numbers, were sending the messages. It may sound benign, but at that age, friends are your world, so when you get several messages, you start to think there really is something wrong with you. “It felt horrible,” Josh said. “I probably cried every day in the 4th and 5th grade.”

Big brother Matthew took advocacy to a heroic level by creating the anti-bullying peer experiential program, The Be ONE (Open to New Experiences) Project.

The Act: Through this journey, Matthew discovered his passion: Building community and fostering a positive school culture.

But how? He researched anti-bullying programs targeting middle schoolers, but could only find high school programs and believes that “the damage” is done by that age. “It’s been ingrained, become habit. You have to get them in middle school — that’s when they’re figuring out their sense of self,” Matthew said.

Without an example, Matthew decided to create a middle school anti-bullying program using peer pressure in a positive way. “What if it were cool to be kind?” he preaches enthusiastically. “What if peer pressure could be used as inclusiveness instead of exclusiveness? When they have this tool, they could either be supportive or disruptive. I want them to recognize that they have the power.” 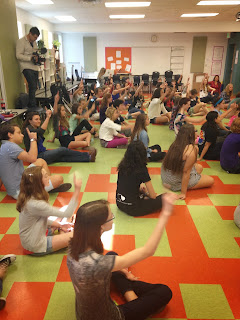 The Be ONE Project is a “positive peer pressure” program. It starts with fun exercises, like holding hands in a big circle and passing a hula hoop around without letting go of hands. There’s joy and lots of laughing. Kids get to know each other and make connections.

The day progresses with focused, serious exercises when kids are asked to sit in a circle and have 90 seconds each to finish the following sentence: “When others see me, they think _____. But if they really knew who I am _____.”

“The Be ONE” challenge is the last activity. When Matthew, who delivers self-defining statements with the passion of an older brother and conviction of a minister, describes a situation, kids are instructed to stand in a line and “Be One” to cross an imaginary line, if the description resonates with them.

At the end of the program, there is a noticeable change of enlightenment and compassion in the kids. Many have tears.

Grab a tissue and watch how every single kid has “crossed a line.” Be inspired to take action — you will discover that you have the power to BE ONE person that is the change-maker in your community:

For all of you who think doing a good deed takes too much time, money or energy – let me

Reflections on manifesting my dream: ‘The Toan Lam Show’

Even though it’s been a few weeks since filming “The Toan Lam Show,” I’m still on a high. Here are a few thoughts that attempt to describe the energetic vibration of realizing my dream of becoming the first Asian American male to host his own talk show.

Don’t Give Up! Something Good is Around the Corner

I’ve heard so many peeps say there is no end in sight with the upheaval and uncertainty of COVID-19. Here’s a reminder that you are going to be OK.