Every time I look at this picture, I’m reminded to always finish what you started.

Adam had always noticed Tarec strolling outside a Starbucks in Marin City, Calif. He frequently pondered whether to invite this homeless man to lunch, but always found an excuse not to. One day, feeling lonely and perhaps being what he described as “selfish,” Adam decided to switch off his critical internal voice and asked Tarec, “Do you want to have lunch with me?”

As they bonded over the meal, Adam learned that Tarec, born and raised in Jamaica, moved to the U.S. eight years ago in search of a better life to provide for his family back home. However, Tarec hasn’t had it easy; he’s been living in a tent next to the freeway and was living off of the berries he picked for the past year.

Feeling sympathetic, Adam brought Tarec back to his apartment for a long-needed wash up. Both of them then agreed to work together to help Tarec get back on his feet.

What happened over the next two weeks was life-changing.

Adam took Tarec around to buy new clothes, apply for jobs online and drive him from door-to-door to seek job opportunities. They received a few positive responses, however, most required people to submit job applications online. Sounds easy, right?

Looking at Tarec struggling to fill out his online application struck a chord with Adam as he realized we all take our computer literacy for granted.

“We’ve all heard someone say, ‘Why don’t they just get a job?’ or ‘They’re lazy,’” Adam said. “I saw firsthand how the ‘system’ is set up to fail people like Tarec. There is no way he would have been able to do any of this without my help.”

After multiple phone interviews and an in-person interview, Tarec ultimately landed a job at a Safeway grocery store.

Landing a job merely marked the beginning of Tarec’s journey. To look presentable, energetic and healthy for work, Tarec needed a better living situation. He felt self-conscious about being homeless and never showed up for work. Days later, he was fired by Safeway.

That’s when Adam learned sometimes it takes more than a job to get out of homelessness.

To provide better living conditions for Tarec, Adam set up a GoFundMe campaign for #TarecsFreshStart that has received media attention and raised more than $16,000 in five months. The goal was to raise enough to cover a year’s worth of rent and basic necessities for Tarec.

Of course, none of this would have been possible without the empowering unity and help of thousands to get Tarec to where he is today.

Back in February, Tarec was eventually able to afford a flight back to Jamaica to visit his family. We’re not sure what the future holds for Tarec, but like what Adam said, “I’m hopeful. And I guess at the end of the day, that’s really all we can be — to just be hopeful.” 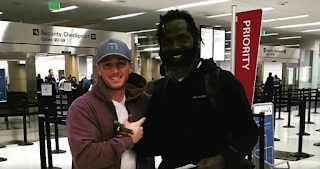 Adam urges to “never underestimate the power of compassion and how even a smile can make someone’s day. Inspiring action from others is one of the greatest gifts that has come from sharing Tarec’s story.”

A wonderful example of friendship and love that knows no race, no color, no class and no gender.

I’m excited to announce the new website, www.goinspirego.com, thanks to my webmaster, the very talented, Lorelle Graffeo!

Finding Calm, Ease and Flow During the COVID-19 Craze

What if ease and flow were things that came your way — even during times of crisis? Here’s how you can practice non-resistance and release your worries and woes.

10 Things to Multiply Calm Inside and Out

I’ve chosen not to focus on despair and the “C-word” and, instead, seek out the beauty around me. Here are daily actions to calm your mind, body and spirit.